skip to main | skip to sidebar

the Wild West Was Here (assembly) 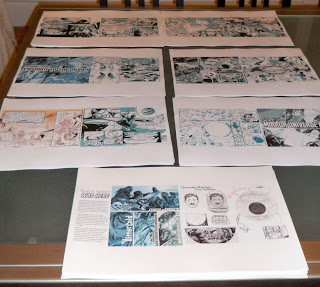 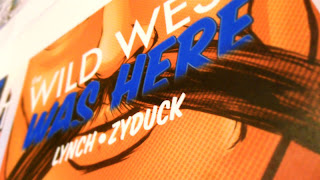 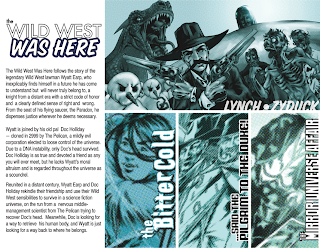 So its official. I have the first few copies of the book in print. It has three stories, the Bitter Cold, ...Said the Pilgrim to the Duke, and the Mirror Universe Affair. I'll be at Springcon here in the twin cities this weekend so swing by and get one. I'll also have the marvel cuties buttons, a few Yul Brynner t-shirts, and old stuff like post cards and even some of the old wyatt earp books.

Stop by and get a sketch. I hate when people charge for sketches (not commissions... I'm totally okay with $$ for those, but I don't like paying for sketches) So I'll do some sketches for free or donations or whatever. Maybe we'll do a sketch trade. You do a sketch for me and I'll do one for you. Either way, come one down.

Eventually the book will be available elsewhere. Eventually.
Posted by Josh at 7:32 PM 6 comments:

Here is a small selection of some Wild West Pages.
Posted by Josh at 6:08 PM 1 comment: 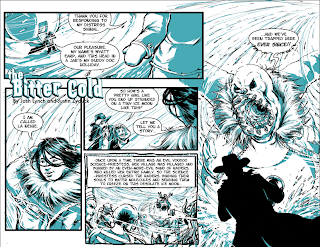 ...Said the Pilgrim to the Duke pg1 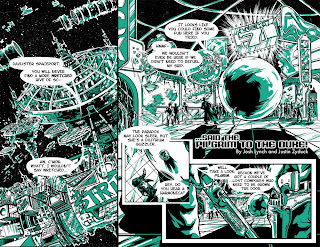 You may remember seeing the pencils and inks for this page a year or two ago... or maybe more. Well that's how long it takes to do a single page. Fact.
Posted by Josh at 6:24 PM 1 comment:

check it out! Wyatt Earp Stuff....

In preparation for this next issue going to print I've been going back through and reformatting old pages. Last time the book saw paper it was a very widesrceen approach where as now we have adopted the standard web comic format. There are pages that were drawn a few years ago in the old layout that now need to be reformatted (since this has been something like 3 or 4 years in the making...sorry) take a look. The originals are on the top. The reformatted versions are on the bottom. 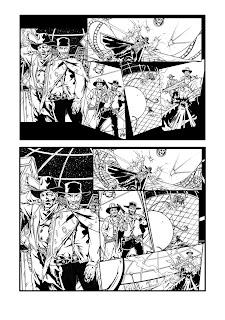 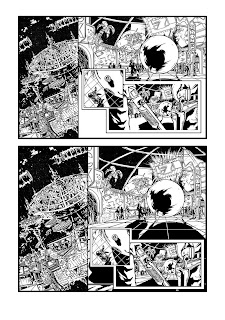 Also here are the front and back covers for book 2. If you find the colors to be garish its probably because you're using Firefox which handles colors in an odd way sometimes. If you are overly concerned and are loosing sleep at night load the image up in another browser. It will look fine. If it still doesn't look fine you can consider the possibility that you may have poor taste.

Also, if you are reading this you should go buy Justin's story in this magazine!
Posted by Josh at 8:56 AM 4 comments:

Buy a magazine that contains a story I wrote and show publishers that you support authors with sideburns:

In case you are interested, info on the stories I wrote, where they will be appearing, and when:

Also: haircut travails. Miss it not!
Posted by Justin at 1:03 PM 4 comments:

Wyatt Earp, the legendary lawman of the Old West, has found himself in a future he has come to understand but will never truly belong to, a knight from a distant era with a strict code of honor and a clearly defined sense of right and wrong.

Doc Holliday, Earp's old friend and fellow gunslinger, was cloned in 2999. Because of a DNA instability, however, only his head survives, suspended in a fluid-filled jar.

Reunited in a distant century, the two rekindle their friendship and use their Wild West sensibilities to survive in a science-fiction universe, dispensing justice and evading the mysterious parties responsible for Holliday's resurrection.

The Adventures of Wyatt Earp in 2999 is a self-published comic created by Josh Lynch and Justin Zyduck, two friends seeking a publisher for this book.

In the sequential art storytelling medium, the comics are created by two separate yet equally important groups: the artist (Josh) and the writer (Justin). These are their stories.